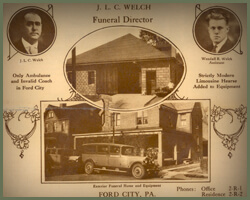 The Welch family has served the Ford City and Kittanning area for four generations and will be celebrating its 100th anniversary in 2012. We are the oldest family owned funeral home in Armstrong County.

After the founding of the Welch Funeral home by J.L.C. (Curby) Welch, the funeral home was then continued by Wendell A. Welch from 1943 until his death in 1988. The funeral home is continuing the family tradition by Curby Welch’s grandson, Robert D. Welch.

A year of daily grief support

Our support in your time of need does not end after the funeral services.  Enter your email below to receive a grief support message from us each day for a year.  You can unsubscribe at any time.